Thegri the Angelic Beastmaster–A Mystery in the Shepherd of Hermas 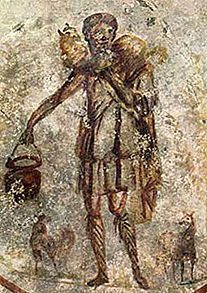 Reading the Shepherd the other day (actually listening to my sweet wife read it to me as we were driving to church), I encountered the following tale in Hermas’ fourth vision. Hermas sees a huge 100-foot long beast, which he compares to a whale (ὡσεὶ κῆτος, 4.1.6) and which spews fiery locusts from its mouth (echoes of Joel 2; Amos 7; Rev 9). Hermas waxes brave and confronts the beast, which lays down passively for him. After Hermas passes the beast, he meets the church in the form of a young girl. She, in the role of angelus interpres, explains that Hermas escaped the beast (a type of the great oppression to come) because: 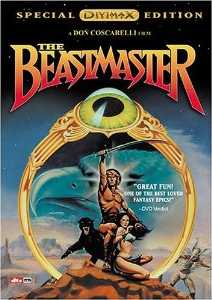 Now, this passage is interesting on many levels, but I want to focus on the key mystery here: the name of the angel. J. Krueger argued that the angel’s name was based off a Turko-Mongolian sky deity (Tengri), but that theory hasn’t gained much traction. Two other explanations are more likely: 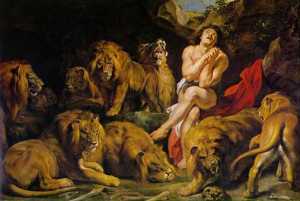 Danielic Background
An older understanding, proposed by J. Rendell Harris in 1920, points to Dan 6:23 as the source for our passage. It reads in the Theodotion text:

As you can see, the text from the Shepherd appears to be taken virtually verbatim from Dan 6:23. Harris proposes that the Aramaic word for “shut” in Dan 6:23—sgr—is the source for the angel’s name, which he proposes was an alteration of Segri. This makes sense, given the Shepherd’s clear dependence on Daniel, but it does require an s to t shift in the name. A Danielic background is also supported by the fact that Daniel 10-12 also forms the subtext for much of the terms and motifs in the 4th vision, including that of the “great tribulation.”

Codex Sinaiticus - An Early Textual Witness to the Shepherd

Conclusion
In the end, I think the meaning and origin of the name remains a mystery, though Harris’s solution seems the best to me. Whatever the case, the Shepherd of Hermas is essential reading for anyone interested in the reception of Jewish apocalypticism in early Roman Christianity.