The Controversy
Creation, evolution and the interpretation of Genesis 1-3 are perennial hot-button issues in the American cultural and theological scene. Among evangelicals, the debate over the genre of Genesis 1-3 has recently reached a fever pitch. Some argue that belief in a literal six-day creation is a necessity, while others think the text is intended to be read literarily. John Walton of Wheaton College has recently published two helpful works that situate the creation account of Genesis in its ancient context: The Lost World of Genesis One (a more popular work) and Genesis 1 as Ancient Cosmology (a scholarly monograph).

Philo’s Contribution
Philo of Alexandria had quite a bit to say about the creation accounts. Here I want to look at how he handles the conflicting creation accounts in Genesis 1 and 2. Modern scholarship, of course, has explained them as the result of different sources, but Philo presupposes Mosaic authorship, so that’s not an option for him. 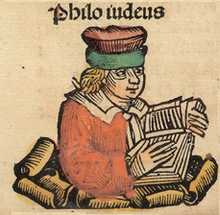 [Moses] says that the cosmos was fashioned in six days, not because the maker was in need of a length of time—for God surely did everything at the same time, not only in giving commands but also in his thinking—, but because things that come into existence required order (13).

In other words, for Philo, the 6-day scheme was not a temporal framework, but simply a logical one. It expresses the logical structure or order of the cosmos, not a temporal sequence in which God created. He goes on to explain why six is the most obvious choice for expressing creation. Interestingly enough, James McGrath, one of my favorite bloggers, posted something tongue-in-cheek yesterday with which Philo might very well agree!

Intelligible or Sense-perceptible?
Philo also distinguishes between the creation of the intelligible or ideal world and the physical or sense-perceptible world. The intelligible world is the model according to which the physical world was created (Philo calls the intelligible model the Logos of God, 25). This model exists in the mind of God. Gen 1:1-5 (Day One) refers only to the creation of the intelligible world. As he explains in his exegesis of Gen 1:1-2, the heaven and earth which God made were actually an “incorporeal heaven and an invisible earth” (29)—they were Platonic forms (See my previous post on the “invisible earth”). So also with the light of Gen 1:3—it is “invisible and intelligible . . . the image of the divine Logos” (31). Only on days 2-6 are the elements of the physical cosmos created, and they are modeled on the incorporeal one of the first day.

He shows us in the clearest fashion that there is a vast difference between the human being who has been moulded now [in Gen 2:7] and the one who previously came into being after the image of God [1:26-27]. For the human being who has been moulded as sense-perceptible object already participates in quality, consists of body and soul, is either man or woman, and is by nature mortal. The human being after the image is a kind of idea or genus or seal, is perceived by the intellect, incorporeal, neither male nor female, and is immortal by nature (134).

Philo finds confirmation of his intelligible-physical division of the creation account in the LXX of Gen 2:4-5:

You can see from the portion I have emphasized that Philo’s Bible says God “created” things before they actually appeared on the earth, and that even after he had created humanity in his image (in 1:26-27), there was no person on the earth. Clearly, Philo reasoned, the first creation must not have been physical, but ideal or intelligible.

A rare photo of primordial nothingness.

Creatio ex Nihilo?
By the way, it is not clear at all that Philo holds to creatio ex nihilo. He never speaks of God creating matter as such, but rather of organizing and structuring (already existent?) matter. This is an area of much contention in studies of Philo.

Coming up Next in the Series
How did Philo interpret the “let us” of Genesis 1:26? Did God have help in creating humanity?