Are the Dead Raised as Angels? (Phun with Philo)

Will I have abs like this in the resurrection?

First, Luke explains why there is no need for marriage in the resurrection. Jesus assumes that marriage is for procreation; and, there is no need for procreation in the resurrection since resurrected people cannot die. Second, we see that “sons of God” is basically synonymous (or at least very close to) “angels”–not a surprise given the OT background of the term. Third, we have a slightly different wording in Lk than in Mt/Mk: Luke has ἰσάγγελοι while Mt/Mk have (ὡς ἄγγελοι). Fourth, when Jesus explains the statement at the burning bush, he adds in Luke: “for all are alive to him” (πάντες γὰρ αὐτῷ ζῶσιν). 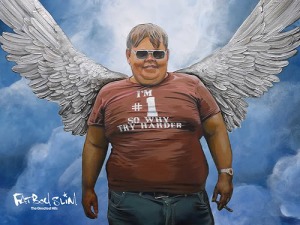 Luke’s term ἰσάγγελος is very interesting. LSJ gives only 2 citations for it, our passage in Luke and a usage in Hierocles, a 5th CE neo-platonist (there it is used in parallel with ἰσοδαίμων [divine]). BDAG gives us a bit more information, including a Christian grave inscription that draws on Lk 20, and most importantly, a reference to Philo, in his treatise On the Sacrifices of Abel and Cain, 5.

Philo does not use the exact word but a phrase that is very close: καὶ γὰρ Ἀβραὰμ ἐκλιπὼν τὰ θνητὰ “προστίθεται τῷ θεοῦ λαῷ,” καρπούμενος ἀφθαρσίαν, ἴσος ἀγγέλοις γεγονώς· ἄγγελοι γὰρ στρατός εἰσι θεοῦ, ἀσώματοι καὶ εὐδαίμονες ψυχαί· Here Philo speaks of Abraham being “gathered to his people.” My LXX reads προσετέθη πρὸς τὸν λαὸν αὐτοῦ. Philo, however, cites it as being added to the “people of God” (τῷ θεοῦ λαῷ), which he apparently takes to refer to the heavenly host, the angels. Thus, Philo concludes, Abraham was made equal to the angels, which means he became an incorporeal soul (ἀσώματος ψυχή). This is a pretty good parallel to Luke 20, I think, since Jesus there uses the patriarchs as a model of resurrection existence, which is described in terms of angelic existence, seen as discontinuous with the present embodied existence.

Associate Professor of Biblical Studies at Houston Baptist University
View all posts by Daniel R. Streett →
This entry was posted in NT Texts, Philo, Word of the Week. Bookmark the permalink.

3 Responses to Are the Dead Raised as Angels? (Phun with Philo)